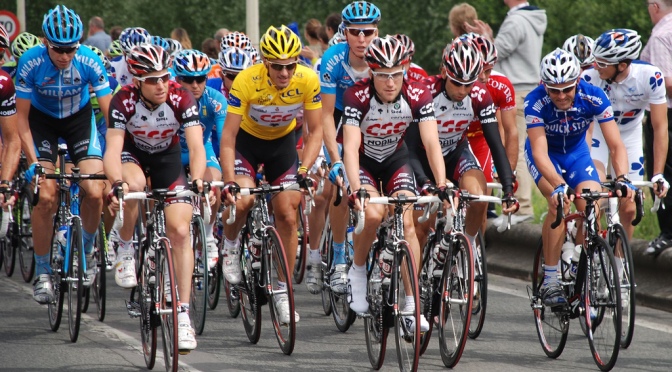 With the Tour de France set to whiz through the city tomorrow, the question on the lips of Cambridge’s many cycling fans is: where do I stand?  Here are some of the best ways to catch a glimpse of the race.

First of all, get there early. The third stage of the race, starting at Parker’s Piece, might not get going until 12:15, but car parks at the Grand Arcade and Park Street open at 07:00 and the cycling village will be open by 08:15. Die hard spectators are likely to be setting up camp from the outset.

Even you can’t battle it through to the front of the crowd to see the start line, a screen will be set up on Parker’s Piece to follow the race all the way to the finish.

From Parker’s Piece, cyclists will loop up via the Round Church and down past Trinity, St. John’s and King’s Colleges, so if you’re lucky enough to have access to one of these, you may find it easiest to view the race from a vantage point in a college. Otherwise, to escape the city centre crowds, head to the south side of the city. Just make sure you’re there in time – riders are likely to reach Trumpington within 10 minutes of setting off, before continuing on to Great Shelford, Hinxton, the Chesterfords and onwards into Essex via Saffron Walden. The race will finish outside Buckingham Palace in London.

Whether or not you plan to attend, bear in mind that roads will begin to close from 17:30 this evening, with most roads on or connected to the route fully off limits by 04:00 tomorrow morning. Most will open again by 15:00 tomorrow, but some city centre streets will be closed until 18:00.