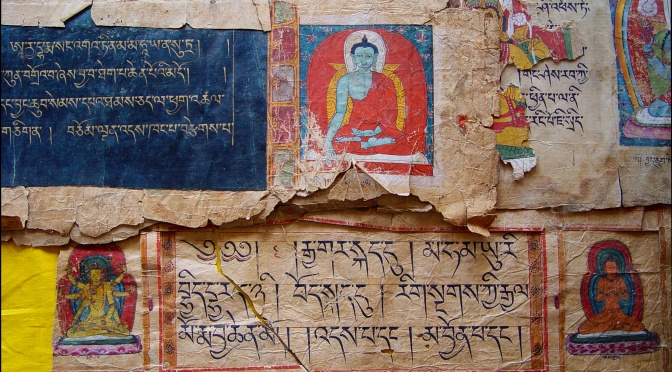 Centuries before the Gutenberg Press revolutionised the spread of Christian and secular thought across Europe, the words of another great religious leader were being expertly printed all across South-East Asia.

Originating in China in the 8th Century AD, the xylographic technique spread quickly to Korea and Japan before reaching Tibet in the 1100s, 400 years after Padmasambhava (or Guru Rinpoche, “The Precious Guru”) brought Buddhism to the region.

Thus began a long tradition of replicating and distributing the word of Buddha in ever more mechanised and mass-producible forms – now documented, for the first time, in the MAA’s exhibition, Buddha’s Word.

The exhibition focusses on the sacred state of words themselves in Tibetan Buddhism. As a vehicle of truth and knowledge, the written word is thought to carry a power all of its own, even when hidden or unread.

Some of the most fascinating artifacts on display include “treasure texts”, such as beautifully crafted and illustrated religious books that were broken up and buried in the landscape for others to discover centuries later.

Elsewhere, X-ray images of statues reveal sacred figurines and, tantalisingly, the just-discernible outline of scrolls sealed inside. Properly named “supports,” as they are thought to carry the holy rather than to represent it, these statues are shown to be pregnant with meaning, their written secrets glimpsed but still obscure.

The exhibition’s sense of mystique is, at times a little too literal – the structure and labelling of exhibits can be a little hard to follow – but it succeeds perfectly in capturing the sense of magic in the objects and images on display. What’s more, it shows the surprising, illuminating ways in which worship of the word has adapted as means of communication have evolved. Ancient artifacts are displayed alongside handheld, solar powered and even digital prayer wheels; photographs show scribes using old batteries to replicate traditional inks and school dropouts in computer labs, digitising precious texts for posterity.

In this tiny gallery, we see the words of Buddha transcribed and honoured and incarnated over and over, through the centuries and into the future. It is a living, breathing history – and, fittingly for a city of scholars, a love letter to the power of words.

Buddha’s Word: The Life of Books in Tibet and Beyond will run until 17th January 2015 in the Li Ka Shing Gallery, Museum of Archaeology and Anthropology.