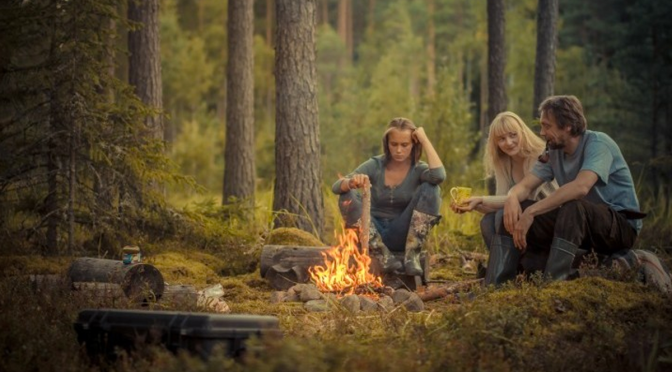 Powerful performances and sublime cinematography help to make this thoughtful Estonian gem one of the highlights of this year’s Festival.

Jointly written and directed by Katrin and Andres Maimik, Cherry Tobacco is a delicate, understated and expertly handled tale of a teenager falling in love for the first time.

Persuaded by her best friend to go on a swampland hike, Laura develops a friendship with guide Joosep, a nature-obsessed man-child that she initially dismisses as a “moss beard” who probably whittles his own knives (he does).

Despite being pathologically, adolescently bored (“Don’t worry, at this age everything bores me – nothing you can do about it,” she tells Joosep) Laura, an aspiring dancer, has a deep sensitivity to her surroundings, cataloguing experiences by movement and smell. The film exquisitely captures her quiet sensuality, heightened at every step by the giddy feelings of first love.

“Nothing really happens,” says Maris Nõlvak of the film, in which she plays angsty 17-year-old Laura to perfection. “But when nothing happens, everything happens, inside.”

A script that relies so heavily on subtleties needs a highly accomplished cast to pull it off. Luckily, in Cherry Tobacco, the acting is a tour-de-force.

The frisson between Laura and Joosep is palpable. Tacit power struggles, flirtations, betrayals and longing are all wordlessly, impeccably conveyed through the slightest movements, glances and moments of contact. Joosep’s occasional flights of impetuous melodrama are, meanwhile, comically quashed by Laura’s silent cynicism and best friend Merit’s more vocal exasperation.

The result is a funny and moving film that feels profoundly human, and which will linger with you for a long, long time.

What’s on Cambridge’s prediction for this year’s Audience Award. Cherry Tobacco will play again at 1.30pm on Sunday 31st August.