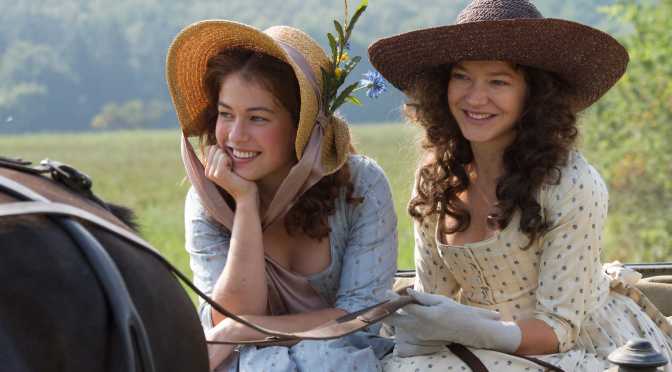 The film festival continues this week with high calibre films from all over the world, including two Oscar-nominated dramas from Germany and South Africa, and a 1970s crime caper starring Jennifer Aniston.

When free-spirited Lina accepts a marriage of convenience to save her mother and sister from destitution, she and Lollo make a pact that nothing will ever come between them. A chance encounter between Lollo and Schiller in Weimar leads to a passionate friendship between all three and, trapped and frustrated by a shared dependency on the aristocratic society they loathe, they agree to secretly share one another equally, with complete openness between them.

Even at three hours long, the film struggles to cram in far too much, at times giving it a fragmented feel. Writer/Director Dominic Graf, a veteran of TV screenwriting in his native Germany, might perhaps have had more success telling the story in a series format that would give the drama space to breathe.

That said, it’s a fascinating foray into literary society, romantic ideals and the daring romantic arrangement that Schiller, Charlotte and Carolina (also a writer) strove to keep private until the end of their lives.

Beloved Sisters is showing again at 5pm on Thursday 4th September at the Cambridge Arts Picturehouse.

In its plot, pace, style and tone, South Africa’s Oscar submission Four Corners could not contrast more with its German counterpart.

Delving into the century-old feud between Cape Town’s sprawling “number” gangs, the 26s and 28s, the film is a visceral fireball of aggression – so much so that it sometimes clouds the plot.

The story follows a number of strands simultaneously. Teenage boys have been going missing from 26-run areas and hothead Gasant is stirring up a war against the enemies that he think killed his brother. Well-meaning police captain Tito thinks he’s on the abductor’s trail. After 13 years in prison, “general” Farakhan wants to put his past behind him and track down the son he’s never met. Chess prodigy Ricardo is struggling to make it to the finals without being shot. And doctor Leila just wants to bury her father and get back to her new life in London.

The interlocking stories each have the making of a powerful centre for the film. But, by trying to tell them all at once, and with such unrelenting energy, they become jumbled and lose their punch.

While highly watchable, the pace and frenetic editing of the film makes it feel almost like a 114-minute trailer, with little opportunity to get below the surface of the characters. There’s little room for reflection: here, even chess games are played at high speed, contestants slamming a timer between moves.

That said, director Ian Gabriel expertly conveys the caged-animal  intensity, bordering on madness, of the men who fight each other to the death in their small, brutish world, unable to conceive of anything beyond it.

Farakhan looks forward to freedom outside the prison walls, but the scenes outside of it barely differ – the same violence, tribalism and gangland codes dominate every space in these mens’ lives, until they can think of nothing else. The world of Four Corners is a self-perpetuating hell in which liberty is impossible, and identity is scrawled on skin as a passport, a warning and a curse.

The final showing of Four Corners is 11am on Friday 5th September, at the Cambridge Arts Picturehouse.

Jennifer Aniston needs a better agent. It’s hard to fathom why an actress that shines in darkly comic indie flicks like The Good Girl and Office Space still says yes to Hollywood monstrosities like Just Go With It and We’re the Millers. Happily, Life of Crime puts her firmly back on track.

Based on Elmore Leonard’s 1978 novel The Switch, Life of Crime is the tale of Mickey (Aniston) a stylish housewife whose Country Club existence hides a less than perfect life with her domineering husband, Frank, played with discomforting malice by Tim Robbins.

Kidnapped by a morally bankrupt bounty hunter, a gun obsessed Neo-Nazi and a down-on-his-luck ex-sailor with a heart of gold, Mickey’s fate looks bleak when it becomes apparent her cheating husband has little incentive to pay the $1million ransom.

Meanwhile, in true Leonard style, Frank’s new girlfriend, a femme fatale played by Isla Fisher, is muddying the waters with some scheming of her own.

Stylistically, Life of Crime borrows a little too heavily from Tarantino and the storyline is too far-fetched to build any real tension as a thriller. Nevertheless, there’s plenty here to like. It’s slick, engaging and darkly funny, and Aniston and Robbins are both on top form.

An entertaining and very watchable caper with a rock solid cast – well worth a watch.