Travelling to / from Cambridge

Generally speaking, trains on this route are very expensive. Bought at the station, an off-peak, anytime-within-30-days return from London to Cambridge (or vice versa) costs £34. However, booking online can save you a fair bit of money. If you’re happy to take the slow route to Liverpool Street, you can find tickets for as little as £6 each way, even booking the day before. These are often (but not always) early in the morning or late at night, however.

A regular train service runs between Stansted Airport and Cambridge and takes around half an hour.  A single costs between £9.50 and £12.50 if booked online.

During the week, the earliest train from Cambridge to Stansted Airport leaves at 4.44am, and the last fast one at 22:10. After this, there are a handful of slow trains, requiring changes and taking over an hour, that run until 22:51. Several trains an hour run from Stansted to Cambridge from 05:16am until 00:30. On Saturdays, the service is more or less the same.

Bear in mind, however, that on Sundays only one fast train runs per hour (at quarter past the hour); if you miss this, or if you’re travelling before 9am, you’ll have to change at Bishops Stortford. This will almost double the length of your journey. Trains also stop running earlier, with the last service from Stansted leaving at 23:04.

Direct trains run to Ely, Audley End (Saffron Walden), Bury St. Edmunds, Newmarket, Norwich, Leicester and Birmingham, whilst many cities further north can be reached by changing at Peterborough (York, Newcastle, Edinburgh), Leicester (Sheffield) or Birmingham New Street (Manchester, Aberystwyth). For most places in the UK (and beyond), though, you’ll need to make the slog back into London and connect from there.

From London and the South of England,  you can reach Cambridge from the M11 motorway. From the North, take the A1 and M1 link to the A14 dual carriageway straight into the city, and from the East and West, the A14 will also take you into Cambridge.

By Bus or Coach

The X5 cross country coach runs between Oxford and Cambridge via Bicester, Buckingham, Milton Keynes and Bedford. You can also travel by coach to/from Stansted Airport and London, but for most long distance routes across the UK (and beyond), you will need to change at London Victoria. The best deals on advance coach tickets tend to start and end at the Victoria coach station, so it’s often cheaper to book each leg of your journey separately. National Express and Megabus are the UK’s main providers, whilst Eurolines often has good deals further afield.

Closer to home, buses run to Newmarket, Ely, Waterbeach, Littleport, Chatteris, Bury St. Edmunds and St. Neots as well as a number of villages surrounding Cambridge. Buses are relatively expensive (especially compared to London) and services tend to be limited in the evenings and during weekends, so make sure you plan your journey carefully.  Timetables can be checked here.

Cambridge is a small, manageable place and the city centre can easily be explored on foot. For anything more than a 10 minute walk, the easiest way to get around is to take your cue from most locals and go by bicycle. If you don’t have your own, you can rent one from City Cycle Hire.

There’s also a reasonably good network of bus routes that covers the train station and surrounding villages, but the Cambridge is not a friendly place for cars. Avoid driving if you can help it. If you are driving to the city, leave your car in one of the many Park and Ride car parks on the outskirts of the city, and take the bus the rest of the way. This will cost you £1 to park and £2.70 for a return on the bus. 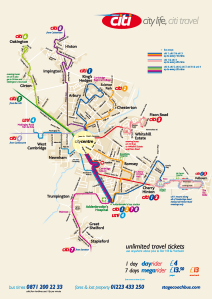